John Winston Lennon was born on October 9, 1940 in Liverpool as a son of Alfred Lennon and Julia Stanley. His father was a merchant and he was often away from home. When John Lennon was four years old, his parents separated and John’s aunt Mimi took custody of him.

During his childhood he started to play banjo and ukulele with his mother Julia. In 1956 she bought him his first guitar. It was love at first sight. In 1956 John Lennon formed his first band called Quarrymen.

He soon met Paul McCartney and George Harrison and the foundation of The Beatles was born. Between 1960 and 1962, they played several times in Hamburg, where they earned their first money.

During these years John Lennon along with Paul McCartney started writing their own songs. Soon they became the best and the most famous songwriting duo of all times.

When they returned to Liverpool and played in the famous Cavern Club, a music producer and manager Brian Epstein noticed that they had a great potential for commercial success and offered to be their manager.

In 1963 The Beatles recorded and released their first album Please Please Me, which was a big success. John Lennon and Paul McCartney wrote 8 out of 14 songs. Between 1963 and 1970 The Beatles released several albums with numerous famous songs, such as A Hard Day’s Night, Help, Yellow Submarine, Let It Be, Nowhere Man and many others.

In 1970 The Beatles broke up and each member started his own solo career. John Lennon married Yoko Ono and they moved to the United States, where he released several great albums. The album Imagine released in 1971 is the most iconic of them. Its title song Imagine became an anthem of the anti-war movement. His other anti-war songs are Happy Xmas (Was Is Over) and Give Peace A Chance. 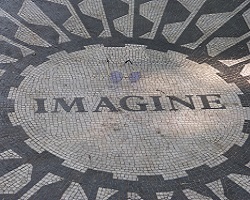 John Lennon was shot by his fan Mark David Chapman on December 8, 1980 in New York. He was rushed to the hospital in a police car, but he was pronounced dead on arrival. John Lennon died at the age of 40, but his songs will live forever.

QUIZ
Interesting reading? We hope so. So now you can check your understanding of the text by answering the following questions in the quiz.

In which month was John Lennon born?
What was the name of John Lennon's mother?
What was the name of the club where they were discovered by Brian Epstein?
Which song is NOT a famous Beatles song?
Where did John Lennon move after the break up of The Beatles?
Reading - John Lennon
You got {{userScore}} out of {{maxScore}} correct
{{title}}
{{image}}
{{content}}
Share your result via
Facebook Twitter Google+
Last updated on February 21, 2022

Prepositions EXCEPT (FOR), BESIDES, APART FROM